​The "best bang for the buck" EQ, is the dbx 1231.  It's a very basic EQ, but it's quiet, sounds good, and is very reliable.  The price (around $450 street) isn't bad either.  I have had a lot of success with dbx EQ's in the past, and they remain a very strong candidate for what most churches need.

​​DBX does have a smaller & more basic unit if you are on a tight budget - which is the dbx 231 ($200 street).  The throw of the frequency "sliders" are a lot shorter, but it remains a very effective, no frills graphic EQ.

​If you need something with a little more options (limiter, feedback suppressor, noise reduction), the dbx iEQ-31 may be what you are looking for.  At a street price of about $630, it's a little more expensive, but you get what you pay for, and the quality is definitely there.

​An alternative to previously mentioned EQ's, would be the Ashly GQX3102.  I love the layout of this EQ.  Very smartly designed, and is made to be a true workhorse.
​Other options are Klark Teknik, or BSS.  The Klark Teknik and BSS offerings are very high quality, but you'll pay for it.  There can be a difference in sonics, but not necessarily to the untrained ear.  With that said, these are good quality units that will last a very long time.

There are quite a few options out there to choose from when it comes to compressors.  Some of them are one-trick ponies, where as others are extremely versatile, and can handle a variety of instruments.  Here are some of the "standouts" :

Originally when I wrote this article, you could still get a variety of outboard compressors at a decent price, but it appears as if the digital console market has kind of gutted the market.  Here's the deal - digital consoles (especially the affordable type) only offer just a few options of DSP-based compression.  You're stuck.  Whereas in the analog days, you picked the flavor you wanted in outboard.  These days for live work, you have only a few practical choices usually in the $1000+ arena unless you go with something super cheap from DBX (like their 266xs) or Behringer.  Both Warm and Klark-Technik (Uli owned) both offer some modern takes on vintage comps - like the 2AKT which appears to be a rework of an LA-2A, or the 1176-KT which is the cheap redo of the classic 1176.  Warm Audio produces the same type of units at perhaps better quality.
MOVING ON...
​At a recent survey of live and recording engineers, they asked them what was the most underrated, best bang for the buck compressor out there, and the result was the ART PRO VLA II Compressor:

One of my favorite compressors is the RNC (Really Nice Compressor) by FMR Audio.  This compressor has had rave reviews ever since it came out 18 years ago.  Yea it's ugly, but the quality of compression is very difficult to beat at this price.  If you need transparent compression (like a pastor's microphone), this unit is hard to beat, and especially at $175.
What is even cooler, is that you can purchase a product by a company called "Funk Logic," and put two of them together, and they'll fit in a rack mount configuration like this): 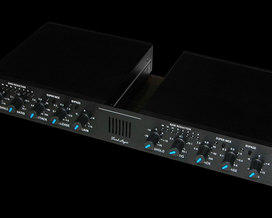 No list of compressors is complete without mentioning the Empirical Labs Distressor!  This is probably one of the most famous and well-loved  compressors to have ever come out.  It truly is a character piece; while also being extremely versatile.  This is on the higher end in regards to quality and price, but it will not disappoint!  This compressor is especially known for bass guitar use with its ability to add pleasant distortion and character.  The first time I ever saw this unit, was when I played in a band that opened up for Waterdeep.  The bassist they had that night had one in his rack, and it sounded killer!  The Distressor is also great for Kick, Snare, or even Electric Guitar.

Reverb, Delay, and other multi-effect units (do they even make outboard reverb processors anymore?)

​There are so many great effect units on the market today.  It would take a massive amount of time to highlight every one that is out there, but here are some that stand out from the crowd:

The first unit that stands out as a great multi-effects giant, is the Eventide Eclipse. There is very little that this unit can't do, and at 2 grand, it better deliver the goods (which it does). ​

​If you cannot afford the Eclipse, the TC Electronic M-One is a great alternative at a much lower price.  Reverb and Delay are its strong points, and at this price, it really is a winner!  This is one of my favorite units.

Another low/mid-priced unit with excellent reverbs, delays, and even dynamics effects is the Lexicon MX400XL.  Lexicon has always been known for producing great sounding reverbs, and this box really does that well.  The MX300 is also available (which is a little more stripped down and cheaper). ​

​If you want a top-notch reverb, look no further than the Yamaha SPX2000.  This really is a multi-effects unit, but the reverbs are what put the SPX line from Yamaha on the map.  It's not a cheap device, but it exudes quality, while also maintaining ease of use, and "tweakability" (yea I know it's not a real word, but hey...it fits). ​

There were some really cool reverb / multi-effects units made back in the day.  Here are some great units that you can usually get for a great price used :

​The Yamaha ProR3 is a long time favorite of mine.  Very useable box that can be had for about $400 used.  When they first came out, they were twice that amount! ​

​​Yamaha Rev500.  Decent reverb box for little on the used market.  Probably set you back about $200.
**Just So You Know - I am not in any way affiliated with any companies mentioned.  My selections on what the best gear is, is from direct personal experience with said items.  I have nothing to gain by recommending any piece of gear, other than the piece of mind knowing you'll be getting reliable stuff that works.