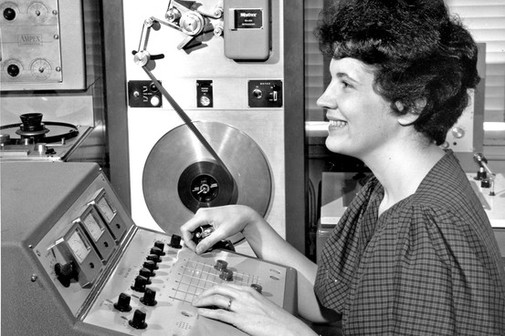 **Disclaimer: Yes I know you probably have a digital console.  I am teaching this material from an analog perspective so that there will be a common denominator as to the functionality of audio device controls, their connections, and their general use.  Every digital console can be radically different as to which menu/screen a certain function can be located.  My goal is to teach these concepts in a very concise and easy to understand manner without being bogged down with each manufacturer's menu preference.  "On a Yamaha Rivage, this can be found....  On a Behringer X32, this can be found...."
One of the simplest things to get right and simultaneously one of the most overlooked facets of live sound and recording is gain structure.

If your sound system: you need to read this page!

Here are some guidelines; we will deal with each part of a sound system separately and in order:

Musician's Instruments, Microphones, and Other Gear

The Mixing Console
In the big picture of gain structure, the primary integral component is the mixing console.  Too often an engineer has almost every channel clipping and wonders why the sound is so terrible. What follows is the best method for setting the ideal gain level for your mixing console; it will make a huge difference in the overall sound of your music.

The Best Method: Have the whole band play a song.  From the drums all the way up the instrument list, set the gain of each channel one at a time.
Here's a tip:  Keep in mind that a band will almost always perform at a level louder than what they soundcheck.
﻿﻿
​Once you have completed the above process for every channel, you have essentially set each instrument to be the same volume across the whole console, which will make the gig a lot easier to mix. 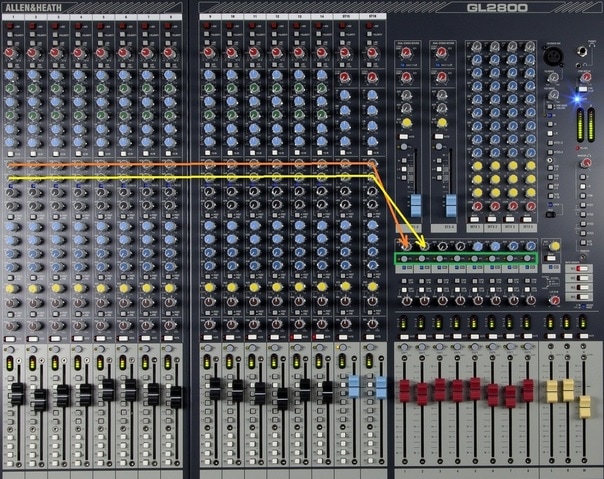 All of the aux 1's are routed to the aux 1 main volume knob.
The Auxiliary Section
It is important to set the auxiliary main volume controls, found in the master section of the console, to the appropriate level.  This is accomplished in much the same manner as described in the previous section, but keep in mind the signal flow as it happens here.

For instance: All of the auxiliary 1's (the orange line) on every channel are routed through the auxiliary main knob #1 pictured in orange rectangle to the far right.  This control is basically the main volume of all of the aux 1's.  The same can be said for Aux main 2, and so on and so forth.  Look at this diagram below as an example: 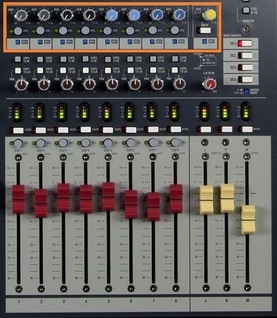 Pictured in the orange rectangle are the auxiliary main volume knobs.
Let's say that you run monitors on some of your auxes.  Those levels can change at any time because, depending on each musician’s need at the time, monitor mixes can be very fickle.  The best thing to do is to keep it simple:
Amplifiers
Many people are confused about the two knobs on the front panel of power amplifiers.

They do not control output volume but rather input sensitivity.

To adjust them correctly:
​
Once you are satisfied that it has been set correctly, move on to the next channel on your amplifier(s).  Remember that your console is providing the signal to your amplifiers when doing this.  I would suggest placing the Main Volume faders on your mixing console to "0" before setting up the input sensitivity on your amps.

Outboard Processing / Rack Effects
Let's say that you have a reverb or multi-effects unit in your rack.  It is important to set the correct gain so as to not allow any clipping within the unit.  For example, say that the effects unit resides on Aux 4 and is routed back into a channel on the mixing console.  Simply look at the meter on the effects unit and make sure that whatever you are sending to it doesn't clip once it gets into the box.  You'll want to look for something like this:​

Now, do you see the meter on the screen outlined with a blue rectangle?  That (or something similar) is what to look for.  Make sure that the signal doesn't go into the red or you'll likely get some nasty clipping artifacts.  Keep in mind that 0 db in the digital realm is considered clipping; on the analog side, it is not. Analog clipping is more forgiving than digital clipping.  If it is clipping, or if conversely you don't have enough signal going to the unit, reach for the Input Level knob on the effects processor and adjust it until you see the signal on the meter reach about 1/2 to 3/4 of the way with no signal peaks clipping.​
Quick Note: Again, "0" db in the analog realm is NOT clipping.  "0" db in the digital realm IS clipping.  Analog clipping can sound pleasing to the ear whereas digital clipping sounds terrible.